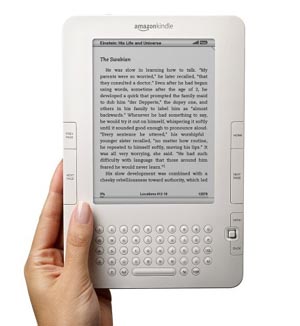 Many of us already know that the Amazon Kindle isn’t the only e-book game in town and there are other offerings that boast the whole e-ink phenomenon. That said, the Kindle is certainly getting a lot more mainstream attention than something like the Sony Reader, largely because of its “free” wireless broadband connection and its deep integration with Amazon.com. But that’s not enough. That’s just the beginning.

Media mogul Rupert Murdoch, the guy behind Fox and other media outlets, says that he is investing in a Kindle competitor. And it’s going to be even more powerful than Amazon’s offering. Murdoch was decidedly cryptic in the interview, not providing very much in terms of details, but the message was there.

Murdoch did not say that News Corp. was creating a device of its own. Instead, they are in “exploratory” talks to invest in another company that can then develop new e-reader and e-ink technologies. This was later confirmed by a News Corp. spokesperson.

The bigger screen may take a little away from the convenience factor, but adding a splash of color can be a huge selling point over the grayscale Kindle. Remember when the first color cell phones hit the scene? Interestingly, Fujitsu already has an e-reader with 260k colors, but that thing costs $1,000.