Although I wasn’t able to rip it apart, I was able to visit my local Apple Store to play with the new 3rd-generation iPod shuffle. As you recall, this is the latest iteration in the display-less music player series, this time moving the controls to a small bulge in the headphone cord.

Having played with the iPod Shuffle 3G for a few minutes, my initial impression is that pictures don’t do it justice. More specifically, this thing is a lot smaller than you’d expect, easily disappearing into the palm of my hand. Sound quality was about on par with other iPods, based on the Miley Cyrus song that Apple decided to preload on the demo units, so it should be fine for casual jogs and trips to the gym.

When a less tech-savvy customer moseyed up next to me to try the shuffle, he couldn’t figure out how to control the darn thing. He kept flipping the tie clip-sized player looking for the play button. Being the good Samaritan that I am, I directed his attention to the provided instructional placard on the demo table.

It shows you how to pause the music (one press of the in-line button), move to the next track (double-press), move to the previous track (triple-press), and how to to get the shuffle to read the name of the track to you (hold the button). The only physical controls on the player itself consist of a single sliding switch. There are three settings here: off, shuffle, and normal.

Is it worth the $99 asking price? As a 4GB MP3 player, I’d say that’s a decent value and the text-to-speech feature is almost good enough to overcome the lack of a display, but I still can’t stand the missing screen. That’s just me though. 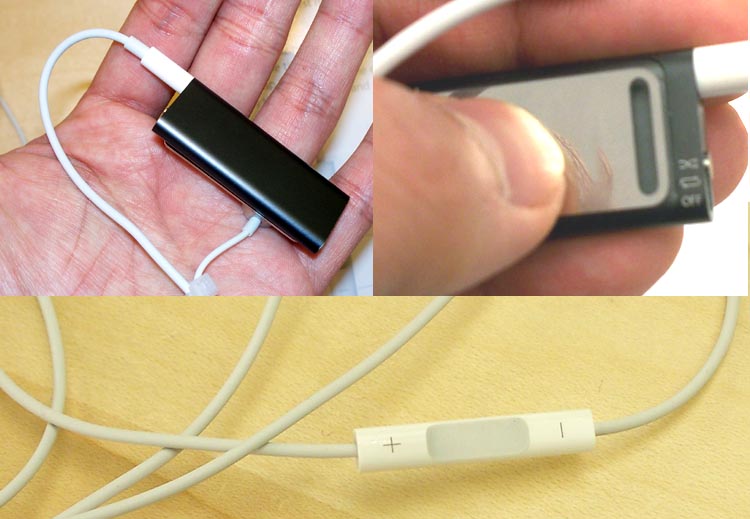