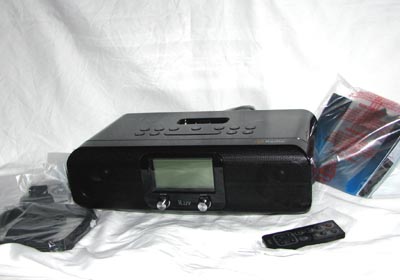 There are way too many iPod speaker docks out there for you to consider, so it’s important that you look for the features that set them apart. This one has a couple of special tidbits that certainly separate it from the rest of the competition.

On the surface, the medium-sized iLuv iHD171 HD Radio Receiver looks like any other iPod-ready alarm clock, but it also comes equipped with something known as iTunes Tagging. In effect, you can tap a single button and it’ll tag the song currently playing on the radio. Upon reconnecting your iPod to your computer, you will be directed the appropriate iTunes page to buy that song.

You get a suitable number of input options here. There’s AM radio, FM HD radio, iPod, and an auxiliary-in jack around the back. There’s no satellite or Internet radio here, but there’s definitely enough to keep you entertained.

In terms of aesthetics and design, the iLuv iHD171 is mostly wrapped up in a glossy black plastic. It’s fairly attractive, but nothing completely out of the ordinary for an iPod alarm clock speaker system of this type. The bright silver knobs on the front, for volume and tuning, are a classy touch though.

Jamming Out to FM HD Radio

So, what’s the deal with HD Radio? I’ve been hearing people talk about it for some time, but I’ve never really looked too far into it. In a nutshell, it takes FM radio with RDS to a new level. Like RDS, the name of the radio station, song, and artist are shown across the display. This way, you’re never left wondering what it is that you are currently enjoying. That’s pretty nice, but far from revolutionary.

What makes HD radio much more notable is the sound quality. With regular analog FM radio, you can expect pretty sub-par music quality. The bass isn’t quite there, the treble isn’t so sharp, and the whole thing can leave you quite unsatisfied compared to your usual musical experience. With FM HD radio, the FM signal is boosted to offer clarity that is comparable to CDs.

It was a little hard for me to gauge this, given the smaller and weaker nature of the integrated speakers, but I would say that this radio dock sounds better than most other docks playing FM radio. 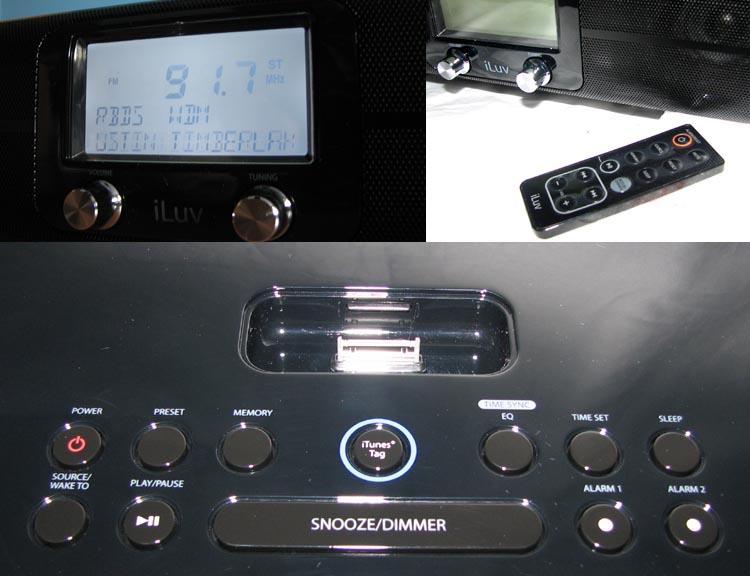 Pumping Out the iPod-Sourced Tunes

Maybe the best way to get a sense of the FM HD radio quality is to compare it to how the iLuv iHD171 sounds when sourced to a docked iPod. Putting my iPod nano in place, I went through a variety of music from Nirvana to Kanye West, Def Leppard to Oasis. I’d say that the iPod music sounded a touch better than the HD radio, but I’m not really all that disappointed in how the HD radio handled either.

One of the additional features on this dock is the ability to synchronize the clocks. Hitting the Time Sync button, you can push the time stored on your iPod to the clock on the dock. That’s pretty nifty, but probably not something you’ll need to use all that often.

Something that irked me quite a bit about the iHD171, however, is that it does not appear to charge the iPod while it is docked in its designated location. With virtually all other iPod speaker docks that I have encountered, a docked iPod is a charged iPod. I left my nano in the dock after listening to some music and when I came back to the iLuv a few days later, I found that my iPod was drained. Did it not turn itself off? Did the iLuv not provide a charge?

Squinting at the Illuminated Display

Another sticking point for me was the relative legibility of the illuminated display. While I appreciate the varying levels of the backlighting, the scrolling text (for the FM HD radio) can be hard to read. There isn’t enough contrast and the text tends to “jump” back and forth. The display certainly needs work.

I expected more from the iLuv iHD171 HD Radio Receiver, particularly because it carries an MSRP of $199.99. The sound quality for both the FM HD radio and with the iPod were perfectly acceptable, but I was not pleased with the legibility of the display and the apparent inability to charge my iPod while it’s playing. The bump in audio quality from analog FM to FM HD is there, but it’s not significant enough on these speakers to warrant the premium price.

This is a decent product, but the value is lacking. It needs to be better or it needs to be cheaper. At this point, it’s neither.