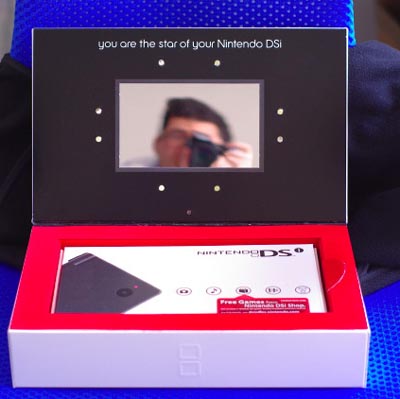 While the new handheld has been available in Japan for several months now, the Nintendo DSi will finally be making its way to stores on our shores starting tomorrow. The Nintendo DSi is set to launch on April 5th and Nintendo has officially announced the first set of titles to hit the DSi Shop, a place where you’ll find all sorts of DSiWare.

Much like the WiiWare titles that you’d find on the Nintendo Wii, DSiWare for the DSi consist of smaller games (and applications) that don’t really warrant the full retail treatment. In the future, I hope to see Nintendo take a Virtual Console-like approach to the DSi, giving us a legitimate way to enjoy NES and SNES classics on the go.

So, what DSiWare titles will accompany the handheld to stores tomorrow? The DSi Browser is a definite highlight, because it grants Internet browsing capabilities to the DSi. Other launch titles include WarioWare Snapped! (which uses the camera), Birds & Beans (action puzzle), Brain Age Express: Math (train your brain), Master of Illusion Express: Funny Face (card tricks), and Art Style: AQUIA (underwater puzzle game).

Remember that each Nintendo DSi will come bundled with 1000 DSi Points to get you started, so that should be enough to get you at least one “free” title. It’s like a gateway drug.