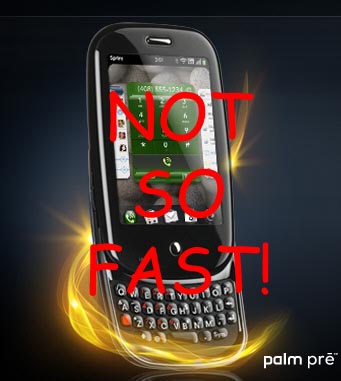 Remember how that supposed Sprint beta tester let it all leak out via Twitter about the Palm Pre? Remember how he told us that the hot smartphone would be launching on April 30 and it would cost $299 with a qualifying two-year contract? It turns out that he’s a crock.

As much as we would like to believe the rumor that the Palm Pre will be launching by the end of the month, that rumor has now been crushed. Appscout is saying that the Twitter user is a fake and any information that he “tweeted” is in no way confirmed or official. He’s just trying to spread rumors and they’re fake rumors to boot.

Then again, why should we be placing more trust in Appscout over this errant Twitter account? It’s not like Appscout is officially linked to Sprint or Palm either, so it’s just one rumor battling another. If you choose to give more credibility to Appscout, then you’ll want to believe that the Palm Pre in Q2 as planned. That would have it released by June 30th.

Combining the two perspectives, we would be left to believe that the Palm Pre will be hitting Sprint’s store shelves sometime between April 30 and June 30, giving us a two month window for sliding, touching, and smartphoning with the Pre. Still no word on dates for a Canadian launch.