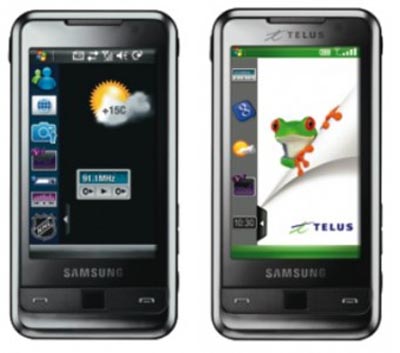 Might I interest you in yet another touchscreen smartphone? Not particularly pleased with the HTC Touch Diamond or the Apple iPhone 3G? Looking for something new and refreshing? While the Samsung Omnia isn’t an entirely new phone anymore, it’ll be new to the CDMA crew in Canada when it launches with both Bell and Telus.

We had heard about the pending release of the Samsung Omnia (SCH-i910) with both Telus Mobility and Bell Mobility already, but here are the first press shots of the phone, complete with their respective carrier branding. The target launch date, as far as we can tell, is being slated for April 10th.

The Bell version of the Omnia, on the left, seems to take on a darker theme by default and comes preloaded with MSN messenger, a weather app, and the NHL Mobile on Demand content that they’ve been pushing. Just in time for the playoffs, I guess.

The Telus version, on the right, continues with the cute animal theme by default, lighting us up with bright whites and greens. As you can probably imagine, both versions can be customized as you see fit, especially with that Samsung TouchWiz interface.

As a quick refresher, the Samsung Omnia gets a 3.2-inch (240×400) touchscreen, 5 megapixel camera with flash, accelerometer, handwriting recognition, Windows Mobile 6.1 Professional, 8GB of internal storage, and a memory expansion slot. They’ll also be preloaded with Facebook, Flickr, and MySpace integration.