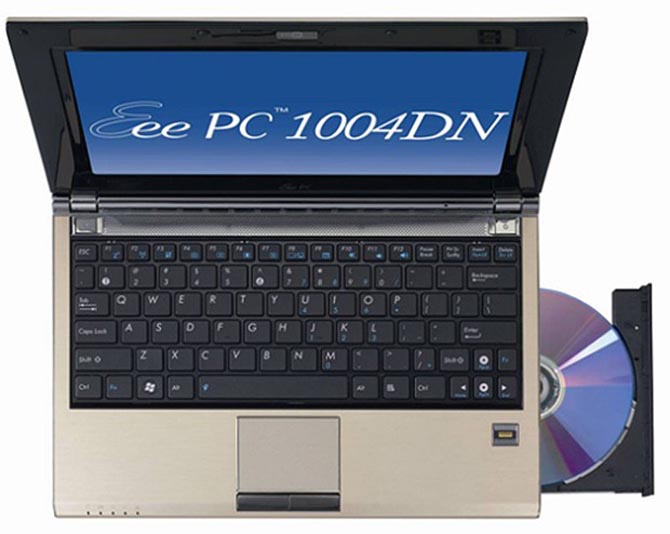 Unlike any other netbook from the Asus Eee PC line, the Eee PC 1004DN actually features a built-in optical drive, pushing the Eee line that much closer to be a real notebook rather than “just” a netbook. The Super-Multi DVD burner isn’t a svelte slot-loading number, but this is a quantum leap for netbooks.

You’ll also notice that there is a biometric fingerprint reader on the right palm rest. That’s another “premium” feature that you don’t normally find on a netbook, further separating the Eee PC 1004DN from the rest of the competition.

Looking through the rest of the spec sheet, you’ll find that it is very similar to the recently released Eee PC 1000HE. You get the Intel Atom N280 (1.66GHz) processor, 10-inch 1024×600 screen, chicklet keyboard, six-cell battery, Intel GN40 chipset with GMA 4500M graphics, up to 2GB of RAM, up to 120GB hard drive, Bluetooth, 802.11n, and a 1.3 megapixel webcam. There’s also an ExpressCard slot for more notebook-like functionality.

Previous rumors are pointing toward a launch some time next month, but Asus hasn’t confirmed anything regarding pricing or availability for the Eee PC 1004DN just yet.