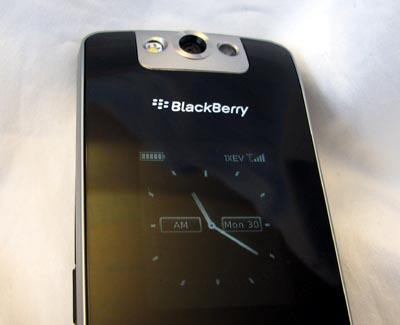 Research in Motion has been working hard to extend its BlackBerry line of devices beyond the conference room and into the hands of non-corporate consumers. They jumped into the touchscreen end of things with the BlackBerry Storm 9530 and today we shift our attention to the clamshell wonder known as the BlackBerry Pearl Flip 8230.

The BlackBerry Pearl Flip has been available in GSM guise for a few months already, but now the CDMA crew can get in on the flipping action too with the BlackBerry Pearl 8230 Flip. The version that I have hear is the one that sells through Telus Mobility, but the one from Bell should be much the same.

It’s quite clear that Telus and RIM are targeting regular consumers with this phone, rather than the enterprise market, but you still get a full BlackBerry experience in a much more compact shape.

Of course, you get all the usual BlackBerry stuff as well, like BlackBerry Messenger, push email, and so on. You can also choose to install additional applications to access Twitter, Facebook, weather reports, and so on.

While I enjoyed the BlackBerry experience, I found the smaller portrait-oriented display to be a little lacking for power users. The lower resolution and the smaller screen aren’t quite as conducive to a great web browsing or email-sending experience, but there’s enough here for the casual user upgrading from a non-smartphone.

Be sure to check out my original BlackBerry unboxing video to see what’s included in the box. In short, you get the phone itself, a wired headset, USB sync cable, wall charger, and standard documentation.

This is a Real BlackBerry in Flip Form

Telus Mobility tells us that we can “open up a world of possibilities with the first BlackBerry Pearl flip smartphone.” It’s not really the first here, since the GSM version has been selling for a few months already, but it is the first CDMA flipping ‘Berry.

This is a substantial upgrade over a conventional flip phone, because you get the full BlackBerry OS experience here. The trackball gets you through the various menu items and you have a SureType keyboard for all of your text entry. The small external display comes in very handy, because it will briefly display incoming messages without forcing you to open the phone.

I’d say that the overall build quality is in line with the Pearl Flip’s candybar counterparts. To get a better shot of its dimensions and utility, look about halfway through this clip where there is a quick hands-on video with the BlackBerry Pearl Flip 8230 from Telus. 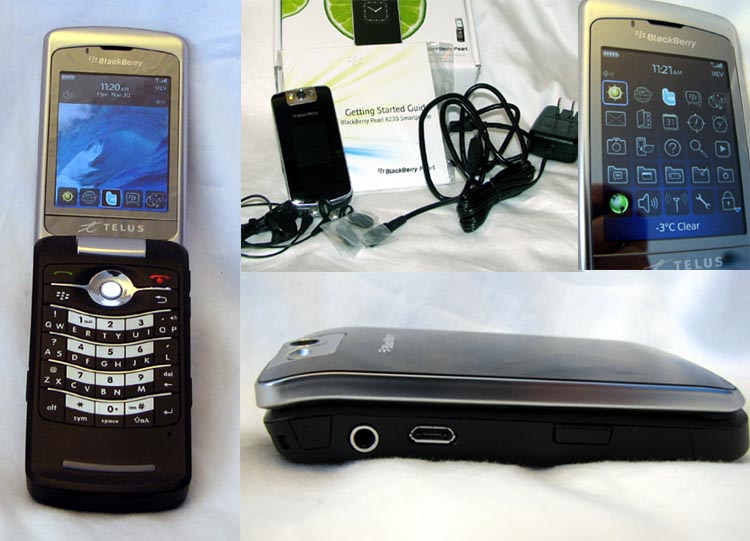 This is largely a matter of personal preference, but I’m no fan of SureType. I understand that it will be a fair bit more accurate than typing on a numeric T9 keypad, but given that the BlackBerry is a web- and email-intensive device, I think nothing short of full QWERTY will do. I much prefer using a BlackBerry Curve over the Pearl Flip.

That said, the keys here are much better than what you find on candybar BlackBerry Pearl smartphones. While the layout is identical, the keys themselves are a fair bit taller, making it much easier to hit the buttons without having to rely on your fingernails. The key size on the Pearl Flip 8230 is about the same as what you’d find on a conventional flip phone like the Motorola RAZR.

Even though the BlackBerry Pearl Flip 8230 smartphone is said to boast a 3G connection with the Telus EVDO Rev.0 network, I found the speed to be a little lacking when it came to visiting websites that were not mobile-optimized.

Retrieving tweets through TwitterBerry took a few extra moments, which wasn’t too bad, but surfing the Internet wasn’t quite as fast as it could have been. Further still, because of the lower resolution and smaller screen, text wasn’t really legible until you zoomed in about two levels. By doing so, however, you see a very small portion of the site. Mobile-optimized (WAP) sites loaded quickly and were quite usable though.

As with most other phones, you have to approach the BlackBerry Pearl Flip 8230 from Telus Mobility with the right set of expectations. Power users with corporate inclinations will find the keyboard and display to be somewhat lacking for their needs, even though you get the full BlackBerry experience complete with push email here.

More casual users who are upgrading from non-smartphones, however, will find a lot of value with the Pearl Flip. You get true RIM quality and an operating system that is much more robust than a conventional “dumb” phone. The keypad is much better than regular Pearl smartphones and the compact size will be a huge selling point.

The BlackBerry Pearl Flip 8230 is currently selling through Telus for $49.99 with a qualifying three-year contract.