Although gas prices aren’t quite as bad today as they were last year, we’re still looking for ways to save money at the pump and to treat Mother Nature a little better. The Toyota Prius has been a great halo car for the hybrid phenomenon, but the Hyundai BLUE-WILL could blast it out of the water.

The gasoline-electric hybrid concept is set to make its debut at the Seoul Auto Show and it’s there that we will learn a little more about what this Prius-fighter will have to offer. From what we hear, the aggressive-looking Hyundai BLUE-WILL (strange name, I know) features a direct-injection 1.6L four-banging engine that is mated to an electric motor.

That kind of powertrain sounds similar to what the Toyota Prius does, but the BLUE-WILL ups the ante by providing the same kind of plug-in electric functionality as the Chevrolet Volt. In addition to doing the usual hybrid thing, this car can be plugged into a standard wall outlet to charge its lithium-ion polymer battery.

Further to its “I love the environment” philosophy, the Hyundai BLUE-WILL concept vehicle features “headlamp bezels made from recycled PET soft drink bottles and dye-sensitized solar cells on the roof.” That solar boost might be enough to power secondary features, like the radio or gauge cluster, I assume. 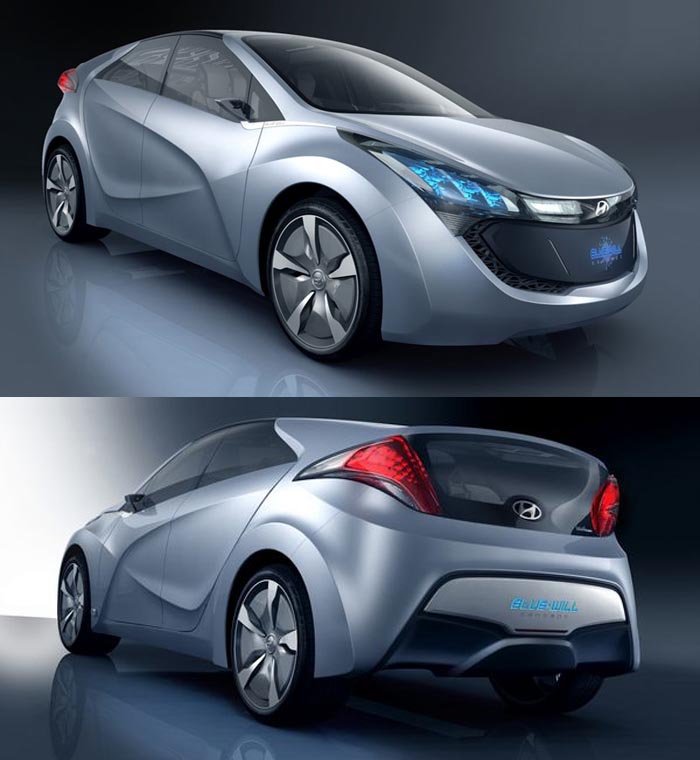