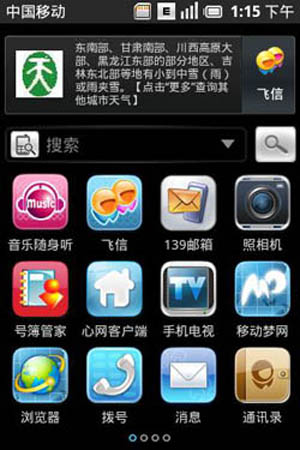 The Apple iPhone seems to be the hottest thing since sliced bread, so it’s not at all surprising that other companies are trying to cash in on its appeal. We’ve been showered with other touchscreen phones, for example, but very few capture the iPhone feel quite as fully as this latest “legitimate” offering.

You may remember hearing about the upcoming Lenovo OPhone and now we’re getting our first look at its operating system. As you’d probably suspect, the OPhone looks a lot like the iPhone. While Lenovo may try to pull out a few tricks on the hardware side of things, the on-screen user interface is totally ripped from Cupertino.

Is this the real deal or is this a fake “leak” from a rogue designer? We can’t say for sure, but if this “leak” is legitimate, Lenovo may be in for some trouble from Apple.

The Lenovo OPhone OS features very similar icons and layout as the iPhone, including the rounded corners and “pages” for the icons. There are some subtle differences, like whatever that is at the top of the screen, but the core layout is identical.