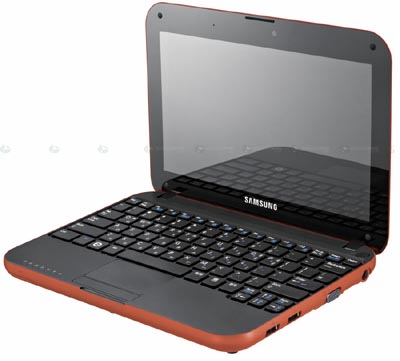 The whole point of owning a netbook in the first place is that the little computer can offer the Internet in a truly portable form. You don’t want to be tethered to a wall outlet, because that’s not exactly portable anymore. Samsung knows this.

While most other netbooks offer between two and five hours of battery life, the newly revealed Samsung NC310 goes so much further with a full eleven hours of computing on a single charge. Not surprisingly, this comes with quite the heavy caveat. The standard battery on this netbook tops out at “just” five hours, so you’ll need the “extended” battery to achieve the 11-hour figure.

The stylish Samsung NC310 seems to be based on a similar platform as the already popular Samsung NC10, but it does come with a few upgrades aside from the aforementioned battery life. You get the same 10.1-inch LCD, 160GB HDD, and 1GB of RAM, but you also get WiFi, HSDPA, WiBRO (WiMAX in Korea), Bluetooth, and a 1.3 megapixel camera. There’s no mention of the processor, but we’ll assume it’s of the Intel Atom variety.

Battery life seems to be one of the big things with new netbooks these days. The Asus Eee PC 1000HE does 9.5 hours on a charge and now the Samsung NC310 goes even further with its eleven hours. I imagine the base configuration of the NC310 will be in line with the competition, but it’s hard to say how much of a premium will be charged for that “enhanced” battery.