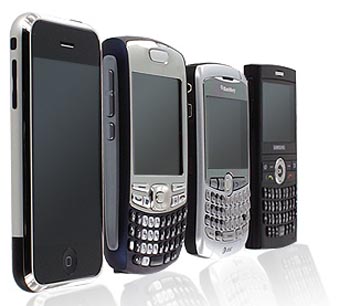 While there are certainly some smaller operating systems out there, the mass populace will largely choose between having a Windows-based machine or a Mac-based machine when it comes to their personal and business computers. Linux makes a little bit of headway in there too, particularly with lower-powered netbooks, but you’re basically choosing between two computer platforms.

When you take a look at the emerging smartphone market, however, things aren’t quite so clear cut. Don’t get me wrong; I think competition is ultimately a good thing for the consumer as it provides a great deal of choice and it fosters greater innovation, but it can also make for a terribly confusing and frustrating experience as well.

Since I’m in the market for a new smartphone (I have been for some time now, but that’s a discussion for another day), I’m taking a serious look at some of my current options. Each of these platforms have their strengths, but what really pains me is that when and if I choose to migrate from one operating system to another, the process can be rather unpleasant. For instance, I use ThunderBird to back up my Windows Mobile stuff but, to my knowledge, there is no viable solution to do that with BlackBerry or Symbian.

Ultimately, I feel that there are now too many smartphone operating systems and having all these platforms is just frustrating. Which is superior? Well, they all have something to bring to the table.

The biggest strength for Research in Motion is in how its BlackBerry line of devices is able to handle your multiple email accounts. From its great physical keyboards (aside from the Storm) to its streamlined data compression, BlackBerry brings a lot to the table. With the pending launch of the App World, we will also see some great applications that expand on this core functionality.

That said, there are certainly some shortcomings here too. The browser isn’t quite as good as what you may find on some other platforms and the UI may feel “clunky” to people not familiar with how a BlackBerry works. It’s also a possible restriction that you can really only do BlackBerry stuff on a device from RIM.

Speaking of clunky, that’s the most common complaint when it comes to users of Windows Mobile-based devices. While the experience will be reasonably familiar with people who use Windows-based computers (like using the Start Menu), the interface is far from pretty. That’s why we see things like the Samsung TouchWiz, Sony Panels, and HTC TouchFLO 3D.

With Windows Mobile 6.5, Microsoft hopes to simultaneously improve the user experience and the overall aesthetics. The honeycomb style is certainly different, but will it be enough to make Windows Mobile “cool”? I doubt it.

The Palm brand has really been hurting and not too many people were all that interested in the Treo line of devices. Palm was able to make some entry-level headway with the Palm Centro, but the OS felt incredibly dated and the hardware far from stellar.

With the Palm Pre and webOS, Palm could really turn things around. The device looks great. The operating system is positively gorgeous and comes chocked-full of fantastic innovations. Real-time contact updates via Facebook? That’s pretty cool. Until the Pre hits the market, though, we have no real idea whether this will be Palm’s return to its former glory.

Since the only place where you can currently get in on some Google Android action (officially) is with the T-Mobile G1, it hasn’t really made the kind of market penetration that Google and HTC had hoped. The OS certainly holds some promise, but it’s still riddled with a whole lot of shortcomings.

The Cupcake update could fix a lot of these problems, like finally providing an on-screen virtual keyboard, but I don’t think the branding is quite there yet. They need to work harder to let the mass populace know about Android and what it may bring to the market.

In all the excitement about the latest Android phones and the pending arrival of the Palm Pre, this little engine that could has largely been lost in the mix. Sure, we get some cool devices like the Nokia E71 and N97, but they don’t get nearly the same kind of attention on this side of the ocean. Remember that Symbian is still the most popular smartphone OS in the world, thanks to Nokia’s huge penetration into Europe and Asia.

Unfortunately, S60 looks like belongs in the wrong century. Nokia and the Symbian crew need to update the look and feel of this otherwise robust OS. Considering how sleek the iPhone and Pre are, an S60-based device looks like a watch calculator by comparison.

People complained about how the first iPhone didn’t allow for external applications, thus rendering it a non-smartphone. People complained how the iPhone 3G still didn’t have stereo Bluetooth or copy-and-paste. When iPhone 3.0 hits the scene this summer, these concerns will no longer be a problem.

I’m not a fan of virtual keyboards and there are a couple of small things that still bug me, but I have to admit that Apple has been a huge winner in this smartphone race. They’re taking market share from everyone else and for good reason: the iPhone looks great and works great.

Are any of these operating systems going to fall out and disappear, or should we expect even more entries in the years to follow? Time will tell.