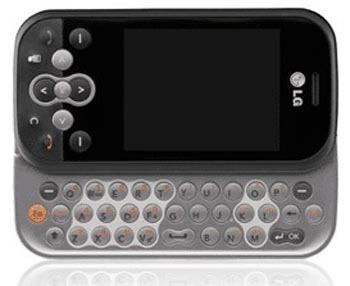 OMG. LOL. TTYL. If you’re hip to the whole short-handed text messaging scene, you may have noticed that Fido is a little short on the messaging phone end of the equation. Everyone else seems to have at least one QWERTY-equipped “dumb” phone, yet the only QWERTY you’ll find with Fido is with the BlackJack II. Sorry, SureType on the Pearl doesn’t count.

If you’re hanging out in the dog house with Fido and would really want to get your hands on something more suitable for SMS, you’re in luck. The LG Neon sounds like it could be coming to Fido as early as this week, taking a quick saunter over from the yard of bigger brother Rogers Wireless.

The LG Neon, along with a couple of messaging phones from Samsung, was released by Rogers a short while ago, but it seems to be perfectly suited to Fido’s target market of text-happy budget phone users. You get a QWERTY keyboard that slides out of the side, a slick touchscreen for dialing, and probably a very affordable price.

Keep your eyes peeled to the Fido website for more details as they become available. Now I just have to hope that Fogers decides to bring a QWERTY BlackBerry to join the pooch too. C’mon Fido, you know you want the BlackBerry Curve 8900, right? I know I do!