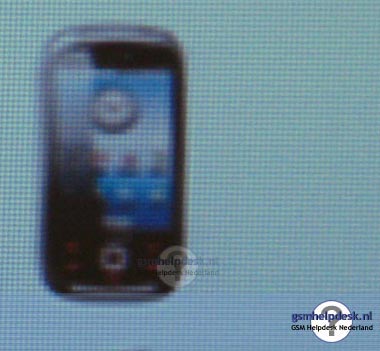 The HTC Dream G1, which most of us know as the T-Mobile G1, is the only commercially available Google Android phone right now, but that’s going to change very soon. HTC can’t hold onto that monopoly for too long, because the Android universe will soon by joined by Samsung.

We’ve heard rumors about an Android-powered smartphone from Samsung for some time now, but this could be our first official look at the upcoming handset, even if the shot is remarkably blurry. The picture was taken at a Samsung dealer show in Amsterdam as part of a PowerPoint slideshow.

The unnamed smartphone from Samsung will naturally be powered by Google Android and it’s rumored that it will feature a capacitive touchscreen a a 528MHz processor. From what we can see, there will be four main buttons on the front and a standard five-way navigator below the touchscreen.

Not surprisingly, very few details have been leaked about this new phone, so we’ll just have to sit on pins and needles until Samsung feels ready to show off its creation to the rest of the world.