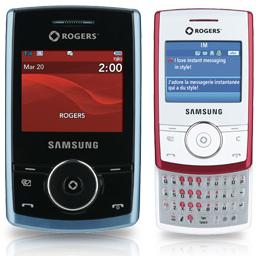 For a while there, it seemed like only the CDMA world was getting bombarded with QWERTY dumbphones but that has quickly changed with the arrival of several handsets at Rogers Wireless. One of the newer QWERTY-equipped phones to hit the shelves of Rogers is the Samsung Propel, a slider phone that isn’t quite a smartphone.

John Connors (not to be confused with John Connor of Terminator fame) from MobileSyrup had the opportunity to take the new Samsung a766 Propel out for a test drive and it appears that he was pleasantly surprised with the experience. When he first saw it, he though it “would be just another texting device.” After playing with it, he finds that he “really [loves] it.”

In terms of basic specs, you get a 2.2-inch display, a slide-out QWERTY keyboard, a 1.3 megapixel camera, and some basic web surfing capabilities. In regards to the keyboard, the buttons are “a bit close,” but they get better as you get used to them. This is a big sticking point, seeing how it’s being marketed as a messaging phone. The whole point is that it rocks QWERTY.

The camera leaves a little to be desired, but the expandable memory and integrated media player seem to be pretty decent. Call quality is good, the Internet is fast, and you even get GPS. “Overall, the Propel is a good deal.”