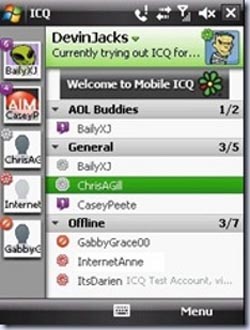 While Twitter and Facebook make up a good deal of my social networking online, there is still very much a place for instant messengers. You don’t want all of your conversations to be public and being able to chat in real-time with your online friends is a definite plus.

It makes sense that Windows Mobile smartphone owners would want to have a good IM client as well, but why on Earth is AOL running a beta for ICQ on Windows Mobile? ICQ was the first instant messenger service that I ever used, but I have long since moved on to other alternatives like Windows Live Messenger, Gmail Chat, and Yahoo Messenger. Seriously. Who uses ICQ anymore?

Well, in recent years, it doesn’t really seem like AOL is on the cutting edge of things anymore, so I guess they’re trying to capitalize on the era where they enjoyed the most success. It was during that time, you see, that ICQ was enjoying its heyday as well. Get it from the source, right?

The new ICQ client for Windows Mobile from AOL will be compatible with a variety of smartphones, including those running Windows Mobile 5, WM 6, and WM 6.1. Among the supported devices are the T-Mobile Dash, Sprint HTC Diamond, AT&T Samsung Epix, Sprint Samsung Ace, Motorola Q, and most Palm Treo devices.

Check out the WM-ICQ beta at AOL.com. I wonder if my ICQ account is stil live.