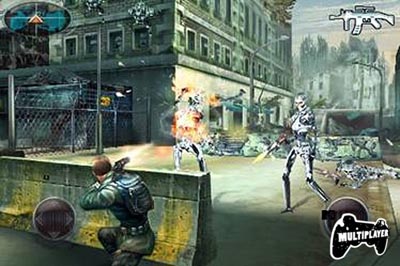 Even without Christian Bale’s on-set outburst, Terminator Salvation is garnering a fair bit of attention from fans of the series. The upcoming Hollywood movie finally takes us beyond Judgment Day to when John Connor is a man and has to do battle with a series of robots bent on destroying mankind. Damn that Skynet.

To coincide with the release of the movie of the same name, Gameloft has announced that it will be releasing a Terminator Salvation game for the Apple iPhone. Gaming on the iPhone has certainly expanded and matured in recent months, giving us access to great racing games and even a portable version of Metal Gear Solid.

As you can see from the single provided screenshot, the graphics are actually really good given the platform being used. Presumably, the controls will be simplified compared to a console game, but you should be able to just tap on those endoskeletons to blast them to smithereens. The duck and cover 3rd-person perspective is reminiscent of Gears of War.