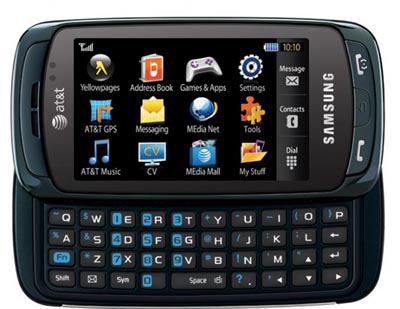 What if you want to get your hands on a QWERTY-equipped handset but don’t want to deal with the complexities of a smartphone operating system? What if you want to have a brilliant display that you can tap with your finger? If you’re over at AT&T, you may be in luck by the end of this month.

There is a rumor swirling around that the Samsung A877 could be ready for mass consumption on March 29. As you recall, this is the phone with the AMOLED touchscreen and the slide-out QWERTY keyboard. In this way, it looks almost like an HTC Windows Mobile smartphone, but it’s not. The non-smartphone comes with Samsung’s TouchWiz, though, so it’ll give an experience similar to that of the Omnia. Except with a keyboard.

I think it’s utterly fantastic that GSM providers like AT&T and Rogers Wireless are starting to embrace the QWERTY dumbphone segment. Texting is so much easier with QWERTY than it is with T9 and the AMOLED touchscreen on the Samsung A877 certainly doesn’t hurt either. March 29th, folks!