Based on how the industry is moving these days, it seems that virtual keyboards are the wave of the future. I’m partial to physical QWERTY keyboards on smartphones myself, but a lot of people are enjoying the larger display of touchscreen only phones. And some are getting pretty efficient at typing on them too.

Are you having trouble getting up to speed with typing out emails and messages on your Apple iPhone? These six tips can really bump up your rate, pushing you into the 40wpm range. That’s faster than some people on their computer keyboards!

1. Relax your fingers and let the Auto-Correct “work its magic.” The iPhone learns from your mistakes over time.

2. When trying to type quickly, use a light feathery touch. This lets your fingers glide over the screen rather than bashing down on it (which takes more time).

3. Hold and slide for numbers and capitalizing. To get a number, hold the 123 button then slide to the number. This is faster than two presses.

4. Apostrophes aren’t necessary, because the handset will know when you need one. Words like don’t and won’t can be typed as dont and wont.

5. Double tap on the spacebar to get a period. The iPhone will insert one automatically.

6. Did the auto-correction correct something that didn’t need to be corrected? Fix it and teach your iPhone what you really want. Hold your finger down until the magnifying glass appears then drag to move the cursor.

Gary from iPhoneInCanada says that it takes at least a week to get used to the touchscreen keyboard, so don’t get too discouraged too quickly. 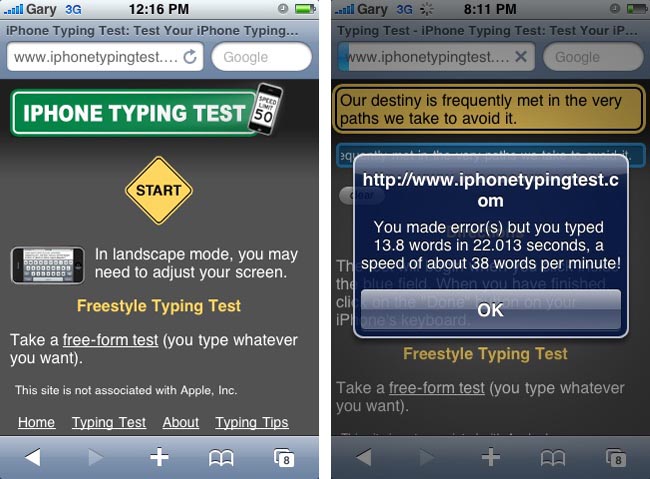