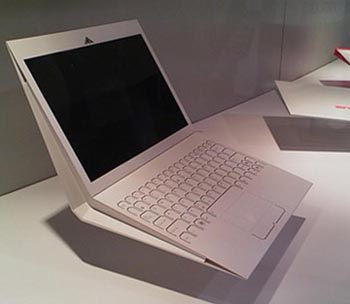 Over at the CeBIT show in Hannover, Asus has more than a few innovations up its sleeve. One of the most notable unveilings was the remarkably slim Asus Fold/Unfold notebook computer.

While in its closed position, the Fold/Unfold looks like it would be combating something like the MacBook Air with its thin profile, but opening it reveals something even more exciting. As you can see through the video embedded below, the keyboard actually slides when you open the lid.

With this unique sliding mechanism, the Asus Fold/Unfold notebook provides extra space for a larger trackpad and the keyboard is held at the more ergonomic angle. There is usually some wasted space between the keyboard and the screen; the Fold/Unfold fills that gap.

Asus designers from France, Italy and Korea collaborated on the project. Better still, Asus CEO Jerry Shen says that this is not just a concept; the Asus Fold/Unfold notebook is being planned for production and will hit the retail channels in the third quarter of this year.

On a side note, the dual touchscreen netbook from Asus is also going to hit production around the same time as the Fold/Unfold notebook.