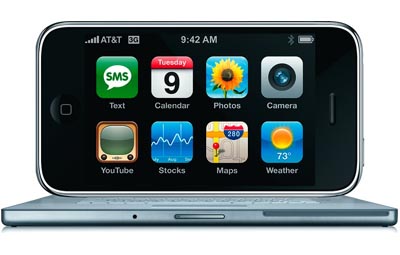 And the rumors are back. After neither confirming nor denying earlier reports, it seems that Apple is indeed working on an entry into the netbook market and it could hit Apple Stores as early as this year. According to a report from DigiTimes, everyone’s favorite company from Cupertino has big plans to offer a netbook to the masses, above and beyond what the iPhone and iPod touch are supposed to offer us.

The crux of this story isn’t entirely new, since we have been talking about an Apple netbook for quite some time, but this most recent report is a little more substantial. Taking this with a bucket of salt, but Wintek says that it has received an order from Apple to provide a huge supply of touch panels. In following this, the upcoming Apple netbook will likely feature a touchscreen display.

In terms of the netbook itself, the current word swirling around is that the manufacturing contract is going to the good people at Quanta Computer. Apple’s relationship with Quanta is already pretty good, so this is an easy choice for them. The connection with Wintek and Quanta is still a rumor, to be sure, but it’s well within the realm of possibility. The Commercial Times, from which DigiTimes got this current story, was bang on a couple of years ago with the original iPhone.

Even if these rumors were to come to fruition, we’re still left puzzled as to what Apple will do. What does an Apple netbook look like? Let’s explore the three main possibilities.

A Netbook with a Touchscreen?

First, this supposed MacBook Mini could take on the form factor of a traditional netbook. It could be a small laptop with a smaller keyboard and a trackpad, but it will obviously have some Apple flair to it. It is very well possible that an Apple netbook will be marketed as a premium lifestyle PC, not unlike the Sony VAIO P.

The kicker would be the inclusion of the touchscreen. With the iPhone and the iPod touch, we get a finger-happy touchscreen, so I’d fully expect the MacBook Mini to do the same thing. In this way, we just might be seeing the removal of a traditional trackpad altogether. Instead, all of your multi-touch mousing could be done on the screen itself.

Alternatively, it could go with a tri-fold design, maybe replacing the trackpad with a smaller touchscreen. I find this option to be less likely, because a secondary display seems too premium for a netbook. If Apple were to take on this idea, we’d probably see it in a MacBook Pro first.

Reaching over to the screen to click on windows may not be the best user experience, so what if Apple were to make the MacBook Mini (or whatever it’s going to be called) into a convertible tablet? There are very few convertible tablet netbooks on the market, so with some Apple branding, it could really take off.

Remember that the iPhone was not the first touchscreen cell phone to hit the market. Not by a long shot. That said, it is arguably the handset that popularized that feature and the same thing could happen in the netbook market with a convertible tablet. The iPhone was different than most of the phones on the market and a convertible MacBook Nano could be just as revolutionary. The challenge would be to minimize the clunky bits, since convertible tablets can feel a little clunky with the swivel mechanism. 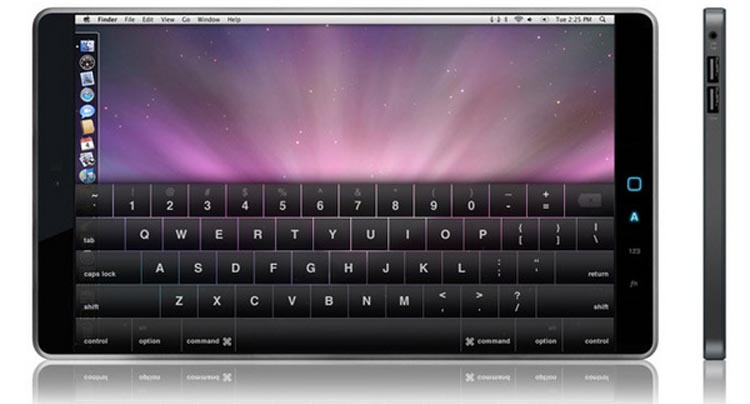 Steve Jobs has been hinting at an Apple netbook, but the very “netbook” term may not be completely appropriate. With the iPhone and the iPod touch, Apple showed that a physical keypad isn’t entirely necessary. They could do the same thing in the portable computing market by producing something more akin to a UMPC or MID, rather than a “netbook.”

Apple has said that its current entry into the netbook market is the iPod Touch, because it can largely do most of the web-based stuff that you need it to do. The problem is that the screen is a little too small for a lot of tastes. Using the slimmed down operating system but on a larger screen, Apple could win with a small tablet-style netbook. No keyboard needed.

By taking this third route, Apple would really be departing from the traditional netbook market currently occupied by Asus, MSI, Dell, HP, and others. There are already premium UMPCs out there, but they are far from mainstream. Apple could change that.

Here’s Looking at You, Q3

This is all conjecture until we hear “one more thing” from Apple. Again, we’ll have to be left guessing, but DigiTimes is saying that an Apple netbook will be ready for Q3 of this year. That’s only a few months away, so be prepared for some fake leaks and mockups in the days and weeks to come.