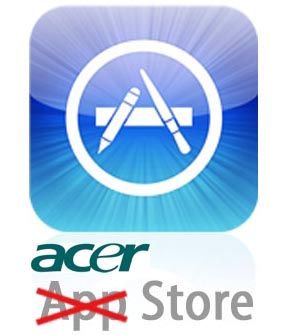 Everyone seems to have an app store of some kind these days. On the Apple side of things, they have the App Store for the iPhone. For the T-Mobile G1, there’s the Android Market. For RIM enthusiasts, there’s the BlackBerry App World. Not to be outdone, it seems that Acer is planning an app store of its own, catering to its upcoming family of Windows Mobile smartphones.

A few Acer smartphones were announced at Mobile World Congress last month. Rather than letting these Windows Mobile 6.1 handsets to speak for themselves and get left out of the expandable functionality segment, Acer wants to equip users with the ability to buy more applications for the Acer M900, F900, X960, and DX900.

No one at Acer has been able to confirm the existence or the developing of an Acer smartphone app store just yet, but the companies corporate vice president said that they are “examining the viability of an app store.” Aymar de Lencquesaing could not confirm when and if they’ll launch it.

While the Windows Mobile 6.1 smartphones are scheduled to launch this Spring, Acer may want until they launch their family of Windows Mobile 6.5 handsets in the second half of this year before introducing the app store. I wonder what they’ll call it. They’re running out of proper terms. How about the Acer App Mall? App Kiosk? App Vending Machine?