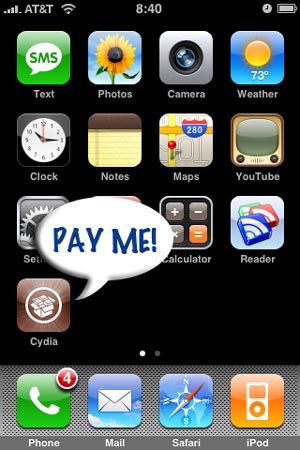 When it comes to the Apple iPhone, there is the official App Store that is officially endorsed and supported by Cupertino. It is there that you can find a huge array of fun applications for your touchscreen handheld. However, if you want to get your hands on something that is not officially supported by Apple, you need to turn to the jailbroken route.

For some time now, the way that you’d get unauthorized apps for your jailbroken iPhone is through the Cydia repository. Well, the Cydia creator wants that route to become a little more official and a little more streamlined. You see, most of the apps through Cydia are free, but the ones that cost money have the payment handled by each individual developer, usually via PayPal.

With this new ambition, Cydia creator Jay Freeman plans to convert Cydia into an “all-out application store” not unlike the App Store, Android Market, or BlackBerry App World. With this new system, the payment mechanism would be standardized and all money would filter through the Cydia system. This makes it safer for buyers and easier for sellers. It gives it a certain air of legitimacy.

Jay Freeman grabbed himself a lawyer to handle the details, as I fully Apple to come forth to attack the whole jailbroken and unauthorized app scene. They have already shown their dislike for things like PDAnet and a more robust Cydia could present a problem for Cupertino. Competition? What’s that?