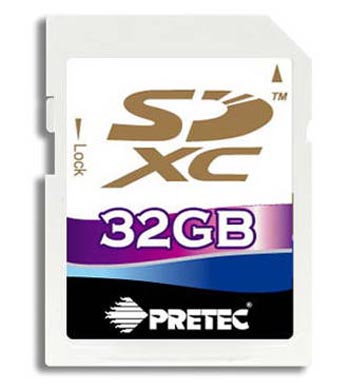 At CES earlier this year, the SD Association introduced us to the new SDXC memory card standard. This was an extension of the existing SD and SDHC standards, giving us more capacity and higher speeds. At the time, the SDXC card was still theoretical. Well, now it’s real.

The world’s first SDXC (eXtended Capacity) memory card has been introduced to the world and it comes from the good people at Pretec. As you may already know, SDXC memory cards look physically identical to their SD and SDHC counterparts, but they’ll be able to stash more digital photos and other documents.

Pretec’s initial offering will be a 32GB SDXC memory card, which isn’t a huge improvement over existing SDHC cards that are already on the market. You do have to bear in mind, however, that future generations have a theoretical maximum capacity of two terabytes. With 2TB shoved into your digital camera, you may never have to empty that card again. I imagine the formatting process would take a while too.

The first offering has a read and write speed of 50MB/sec, but manufacturers are working toward speeds as high as 300MB/sec. That’s pretty fast! The downside is that there are no consumer products available yet that actually support the SDXC format. We encountered the same thing when SDHC hit the market, so it’s only a matter of time and patience.