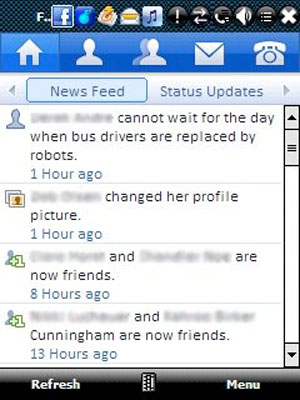 What’s the point of having a smartphone if you can’t poke your friends on the go? For those of you rocking a Windows Mobile handset, you can now get your hands on a pretty good Facebook application and, as far as I can tell, the app is completely free for you to enjoy.

John Herman of Gizmodo calls this the first “usable” Facebook app, giving you a real interface with the popular social networking site. As with the applications that you find on other platforms, the Windows Mobile Facebook app breaks the site down into a series of tabs, so you can quickly access things like status updates.

Up until now, most Windows Mobile users have either made use of the basic mobile interface (which leaves a lot to be desired) or they have tried to run the iPhone version of the site through Opera Mobile. Neither of these solutions is particularly ideal, so it’s good to see something developed for Windows Mobile from the ground-up.

The enthusiasts at the XDA-Dev forums can be thanked for this creation, as they ripped the WinMo Facebook app from the latest Windows Mobile 6.5 builds. In this way, we can almost expect that most upcoming WM6.5 phones will come preloaded with quick access to Facebook. Go to XDA to find more details.