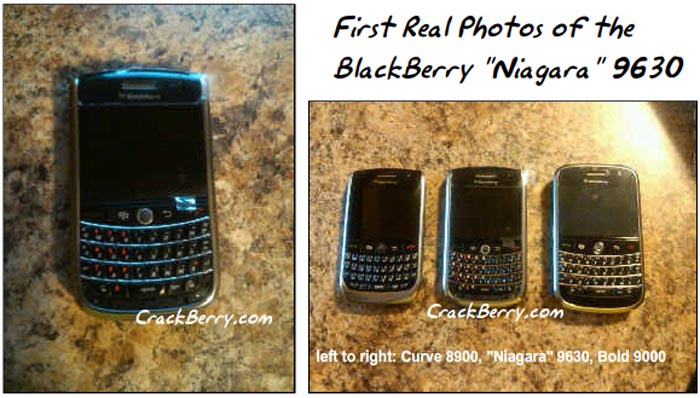 I’m currently on the hunt for an inexpensive unlocked BlackBerry Curve 8900 “Javelin”, mostly because I like the keyboard and I prefer the smaller footprint that it offers compared to the larger and 3G-equipped BlackBerry Bold. Over on the CDMA side of things, the new Curve has yet to make an appearance but that could be changing very soon.

Just as the folks at Rogers Wireless and T-Mobile are able to enjoy the BlackBerry Curve 8900, the CDMA side of the equation may soon be treated to the “Niagara” 9630. This is the new BlackBerry Curve 9630 that should be making its way to CDMA carriers very soon, taking on much the same look and feel as the Curve 8900.

As you can see from the picture provided below, the overall dimensions and appearance of the BlackBerry Curve 9630 “Niagara” closely mirror that of the Curve 8900, but there are a few Bold-inspired elements as well. The keyboard also appears to be curvier than either of the GSM variants.

The metal bezel near the bottom appears to be slightly smaller on the Niagara compared to the Javelin and the Curve, but we’re still not completely sure about the exact specifications. According to the rumors, it’ll get the 8900’s three-megapixel cam and GSM, as well as a 480×360 display. I expect to see it land on Verizon, Telus, and Bell at some point in the near future.