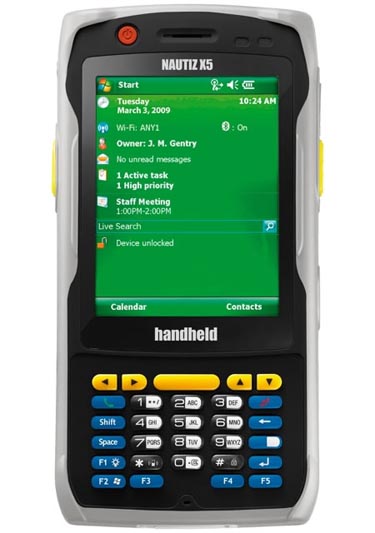 Some people like their electronics to be as slick and sleek as possible, but other people value the ability for their gadgets to withstand the harshest of conditions. Clearly, this product caters to the latter.

Coming from the folks at Handheld Europe is the new Nautiz X5, a super rugged PDA that will survive just about anything that you toss at it. It seems to have a conventional numeric keypad, so I’m assuming that it does the cellular thing as well, though there is no explicit mention of the ability to hop onto a GSM network for voice calls and text messages. There is Wi-Fi for sure, though, so you may be able to Skype it.

In terms of toughness, the bulky number will handle temperatures ranging from -20 to +55 degrees Celsius, resist the damage inflicted by sand, and will survive drops from heights as high as 1.8 meters. Naturally, if you toss it from the top of the Empire State Building, it probably won’t survive that drop.

Showcased at CeBIT in Hannover, the Nautiz X5 has yet to receive official release and pricing information.