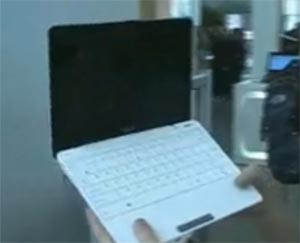 You didn’t think that Asus was just going to sit idly by while fellow netbook enthusiast MSI challenged the MacBook Air in thinness with the MSI X-Slim Series, did you? Keeping notebooks and netbooks as thin as possible is still very much the rage, so Asus is offering its entry in the form of the Eee PC 1008HA.

Also known as the Sea Shell, the new Asus Eee PC 1008HA is said to be just as slim and appealing as the MacBook Air and the MSI X-Series, but it’s not the same 13.3-inch size as its direct competitors. Instead, the Eee PC 1008HA takes on the same 10-inch widescreen display as the Eee PC 1000 series. I guess that “8” makes it skinnier.

Measuring just an inch thick and tipping the scales at a paltry 2.4 pounds, this latest addition to the Eee PC series of netbooks gets spec’d with an Intel Atom N280 processor (the same as the 1000HE), 1GB of RAM, 160GB hard drive, Windows XP Home, Bluetooth, and a 1.3 megapixel webcam. We assume that the 10-inch screen is doing the 1024×600 thing, though we can’t say for certain.

For a better sense of scale and an overall better look at the Asus Eee PC 1008HA, take a moment to watch the hands-on video from CeBIT in Germany below. Looks pretty sweet to me.