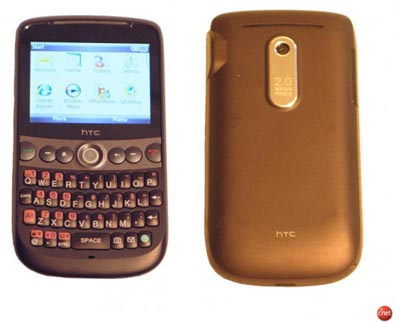 I already thought that the HTC Excalibur had a lot of BlackBerry-like tendencies, but the upcoming HTC Maple takes the RIM-inspired design to a whole new level. Heck, even the Maple name conjures up certain Canadian connotations (RIM is Canadian, in case you didn’t know).

The HTC Maple is very much like a BlackBerry Curve. It has a landscape-oriented color display at the top, a full QWERTY keyboard beneath, and it even rocks a trackball for navigation. In previous iterations, HTC has used a standard five-way navigator, so the shift to the trackball really sticks out as a major Berry-like change.

While it does not make use of the BlackBerry Application Suite for Windows Mobile, the HTC Maple is just as capable at handling your appointment book, sending emails, and surfing the web. It seems that social networking is at its core, giving you something called Inner Circle to “keep tabs on the right people at the right time.”

No, this phone probably isn’t quite as exciting as something like the HTC Touch Pro2, but the HTC Maple could be a great fit for someone who fires off a lot of emails, wants quick access to QWERTY, and prefers to stay away from the ways of RIM.