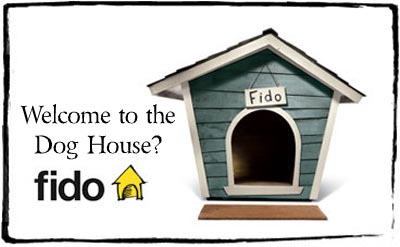 If you’ve been poking around in Howard Forums, you may have noticed some mention of changes coming to Fido in March. Well, March is here and the rumored changes to Fido have indeed arrived. This isn’t going to be announced with a major marketing blitz, because the average consumer won’t even notice the difference. To them, it’s business as usual.

What’s changed? What we once knew as the retentions department at Fido has been rechristened as the Fido loyalty department. I seems that this creation consists of more than s imple name change, because the new department has a slightly different philosophy when it comes to retaining customers keeping customers loyal.

They say that it is much more cost-effective to keep a customer than it is to retain one. The difference in the amount of money invested is absolutely gigantic and that’s why companies have to work so hard to keep the customers that they already have. The telecommunications industry in Canada is no exception.

When your contract with Fido starts to run out and you notice some greener pastures at Telus or Bell, you may feel inclined to call into Fido, telling them that you are ready to port your number over to another carrier. Naturally, the old pooch doesn’t want you to leave so, in the past, you’d be forwarded to the retentions department where they’d do what they could to keep you around.

They don’t match plans, per se, but they may be able to construct a special offer with extra minutes and additional monthly credits to woo you back into the dog house. With this knowledge, a lot of subscribers who really had no intention of leaving would phone in to try and get what they “deserved.” Well, Fido is tired of being taken advantage of.

The New Fido Has New Strategies

When the new Fido was unveiled to us late last year, it was clear that the dog took on a more distinct personality and outlook. For the time leading up to the relaunch, we weren’t really sure where Fido fit into the market. It didn’t appeal to the corporate or high-end crowd, nor did it have remarkably affordable plans to compete against the Virgins and Koodos of the world. The relaunch shifted the focus to the budget market and the introduction of the loyalty department furthers this philosophy.

The new strategy is to be as affordable as possible, building up the profit by sheer volume rather than through an increased ARPU (average revenue per user). Sure, the iPhone and smartphone guys help by subscribing to data plans, but the vast majority of new Fido subscribers want cheap phones with cheap plans.

The Arrival of the Fido Loyalty Department

So, what does the death of the retention department mean to current subscribers? Well, the new loyalty department, on paper, isn’t all that different. It still exists to provide loyalty offers, retention offers, and winback offers. It’s still there to issue credits and convince current subscribers to stick around.

From what I hear, however, Fido is really starting to tighten down on the level of goodwill that it will extend to customers. They will be more stringent and Scrooge-like when it comes to issuing credits. Further still, if you’re already on one of the newer sans-SAF plans, they will not offer you a retention/loyalty plan at all.

In effect, new subscribers may end up with better promotional offers than old ones who simply an incentive to stick around. Is this for the best? Is this the easiest way for Fido to grow its volume and accommodate more pups in the dog house? We’ll see soon enough.