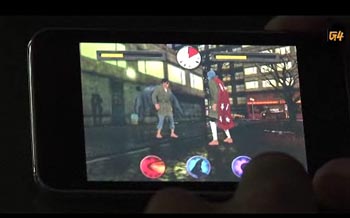 One of the bigger movie releases this year is Watchmen, so it only makes sense that they’d have all kinds of product tie-ins to accompany the comic book movie to the big screen. They say that Watchmen could have the same impact as 300 had a couple of years ago.

It won’t be all that surprising to find Watchmen games on the major consoles, but the Apple iPhone is getting in on the action as well. Who is going to watch the Watchmen? iPhone users, of course!

This isn’t going to be just some cheesy action game either, because it is apparently a massively-multiplayer online game (MMO). Dubbed Watchmen: Justice is Coming, the iPhone game allows you to roam around New York City as a custom hero, punching random people as you encounter them. This integrates with Amazon’s web services.

The weird thing is that the combat does not appear to be in real-time. Instead, Justice is Coming makes use of a turn-based brawling mechanic that definitely feels out of place for a game of this kind. That said, the MMO-ness could make this a real hit. Peep the video for more info.