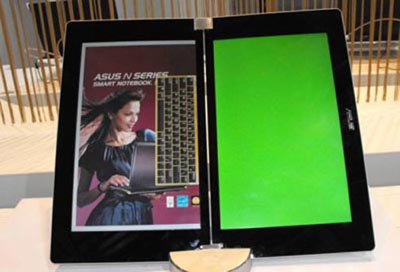 About a year ago, we heard about the ambitions of creating the second-generation OLPC with dual touchscreen displays. The configuration got you to open the little laptop like a book, removing the physical keyboard altogether. It was certainly a novel concept, but it seems like the idea could be gaining some ground with Asus.

Over at CeBIT, Asus has revealed one of their latest creations: a new laptop that gets rid of the keyboard, opting instead for dual multitouch displays. This is almost exactly like the OLPC2, except it’s from a major laptop manufacturer.

The Dual Panel laptop, as it’s being called, allows for the use of a resizable virtual keyboard and touchpad, sort of like what you get on the iPhone only a lot bigger and with two screens. Holding the laptop horizontally, you could really use it like an e-book reader, flipping through the pages as if they were almost real.

Not surprisingly, there is no official confirmation from Asus that the company will actually pursue this design in a consumer product, but the concept is certainly an interesting one. Stay tuned, because netbooks just got a whole lot of new life.