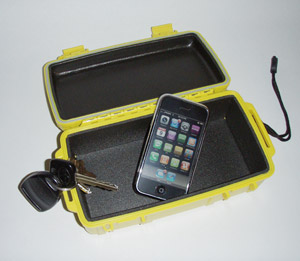 Scratches, cracked screens and other damage plagues most mobile devices. No matter what you do to protect your phone, Blackberry, iPod or iPhone, it’s going to end up with gouges, dings and dents.

That’s where OtterBox products come in. With a line of cases for the latest mobile and smartphones, the company has carved out a niche with products that offer more than rudimentary protection you get from standard silicone or neoprene sleeves.

I first heard of the brand when I was doing a lot more biking and kayaking. The company sold underwater cases for MP3 players and sealed adventure cases for water sports.

In fact, I had the company forward me one of their 3000 series cases so I could see if it was really as watertight and useful as their company literature claimed.

And on the smartphone front, I asked them to send me their newest iPhone case – the Defender.

Let’s dive right in with the real OtterBox. I got the 3250 which is about 8.8 inches long, 5.1 inches wide and 3.1 inches deep. Plenty of room inside to put your wallet, some dry socks, a cell phone, maybe a snack and of course your car keys.

The case has two clasps that snap shut to seal out the elements and the box comes in four colors – yellow, blue, black and yellow with a clear lid.

At $25.49 – online price – I’m not sure I wouldn’t rather get a few quart-size Ziplock bags, but the case does feel sturdy and it definitely keeps out the water. I thought it was overkill to put my GPS unit inside (as that’s waterproof too) but it would be good for more fragile items like eyeglasses, a watch, earbuds and other small tech that might sneak out of a plastic bag.

Looking at the size of the box, I can see that it would easily fit in the hull compartment of my kayak, and it comes with a lanyard in case your boat doesn’t have a secure area to store it.

Both ends have a slot molded right into the case so you could put a belt through it if you were taking it hiking or climbing, too.

Inside is a neoprene-like liner that keeps your stuff from getting scratched, but it’s not too thick so I wouldn’t advise shaking the case to violently.

On the phone front, I absolutely love nearly everything about the Defender series iPhone case. I’ve been using the first-generation case for about a month and have found only one annoyance – and the company has fixed that drawback in the new version for the iPhone 3G.

Let me describe the case first and then I’ll tell you how they made it better.

Picture two halves of a clam that close around your phone and hold it securely. Then picture a grippy rubber sleeve that fits snugly over the clamshell to offer you some purchase when holding the slick clamshell.

That’s essentially the OtterBox Defender case. It’s a hard plastic case in two halves that snap together around the iPhone (or whatever model phone you have). The company has cases for Blackberrys, including the Storm, and for a handful of other makes and models.

The iPhone Defender costs $50, which seems like a bit much until you compare the price to most everything else on the market. Even simple silicone sleeves often sell for $30, so I think the Defender is a bargain for what it offers. 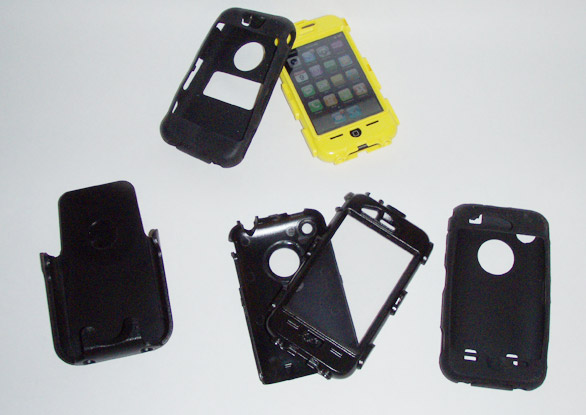 What’s that? Well, if you’re familiar with the Apple phone, you realize that there are five spots on the phone that you need to access regularly. These are the headphone jack, the dock port, the volume switch, the off switch and the mute/vibrate switch. On the first-gen Defender case, the mute switch was blocked and I saw that as a major drawback.

To operate the mute switch you would have to peel back the rubber outside layer and then open up the clamshell. Then you could manipulate the switch and then put the whole deal back together. It was a pain.

With the 3G version, the mute switch gets an opening in the clamshell and a protective rubber flap like all the other switches have. Now there’s no monkeying around for three minutes to set your phone to vibrate. Just flip the flap and flick the switch.

How is it on bumps and bruises? Just perfect.

In addition to the clamshell case, the screen is protected by a clear plastic piece. This isn’t a flimsy, add-on film. It’s an integrated piece of plastic that doesn’t interfere with the touchscreen but keeps dust, dirt, scrapes and scratches from reaching your screen.

Same for the back. A similar piece of plastic blocks the camera and keeps it safe and in a purely aesthetic touch the company put a clear window over the Apple symbol on the back of the phone.

So, protecting your tech. What do I like about OtterBox?

Solid cases that offer protection from bumps and scratches.
Some cases that even offer waterproof protection.
Well-made designs that are snug on mobile devices and sized large enough to make them useful in outdoor applications.
Intangible credit for being smart. The improved design in just one generation of cases makes me think the company actually uses their own products and strives to improve them.

The price for both the water case and the phone cases is at the top end of the spectrum. They’re very well made and my iPhone has been tossed around a lot since January and it’s still pristine – so maybe you get what you pay for.
The Defender case can be a little daunting to take on and off. This will be especially annoying for people who might be juggling SIM cards on their smartphones, but that won’t be most users.

OtterBox has been around for a decade. Their products do what they say they’re going to do…protect your stuff.

For my money, even though I can be pretty frugal on accessories, OtterBox cases make the cut.