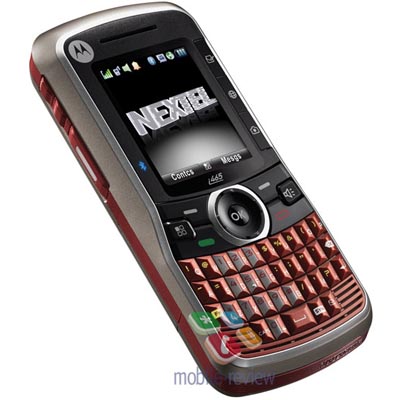 Last month, we caught a sneak peek at the Motorola i465, giving us just a glimpse into what Motorola had in store for the iDEN enthusiast crowd. That glimpse has now been expanded into a full look, because here is the first official press photo of the Motorola i465.

As you recall, this is the first iDEN device from Motorola to ever boast a full QWERTY keyboard. Like the rest of its push-to-talk lineup, the i465 has a fairly rugged and tough exterior, so it should be able to handle a reasonable level of abuse at your chosen work site.

In terms of features, you get the aforementioned keyboard, Bluetooth 2.0, a VGA photo camera, and an integrated web browser with a dedicated key for Internet access. The features aren’t completely out there, but the keyboard will come in handy for text and email users.

The released press shot has the Motorola i465 with some Nextel branding, so I’m assuming that’s where it’ll go. It’s also very possible that the i465 will get some play from Boost Mobile as well.