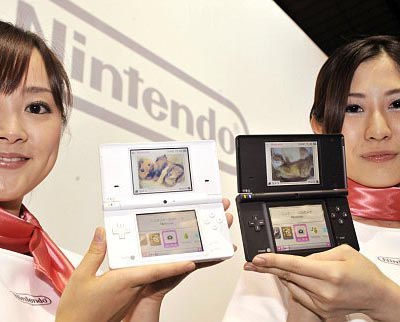 I have to admit that I’m quite the Nintendo fanboy. Ever since I picked up my first NES controller, I was hooked. From there, I went on to get the original Game Boy, SNES, N64, Game Boy Advance SP, GameCube, Wii, and the DS Lite. Nintendo has always done a great job with creating entertaining game systems and games to accompany them.

The latest offering from Shigeru Miyamoto and the rest of the Mario-themed crew is the upcoming Nintendo DSi, a handheld that is already available in Japan and will be joining us in North America very shortly. Given my tendency to enjoy just about anything from Nintendo (except for that very sad Virtual Boy), you would think that I’d be the first in line to buy a DSi when it finally hits Canadian shelves. And you’d be wrong.

For the time being, I have no intention of indulging in a Nintendo DSi and let me explain why.

1. Inclusion of Cameras is a Novelty

One of the new features that you’ll find on the Nintendo DSi is the inclusion of dual cameras. There is one in the hinge that faces the player, presumably for EyeToy-style gaming possibilities in the future. The other one is located on the top lid and points outwards, letting you take pictures of the world around you. The quality of both of these cameras is remarkably poor, of course, because they’re not meant to replace your point-and-shoot.

Until I see a game that makes great use of this kind of functionality, I don’t see why I would want to get a DSi with a camera. Just about every cell phone these ays is a camera phone and most will offer better picture quality than the DSi. If I need a spontaneous pic, it’s faster to whip out the camera phone and snap a shot than it is to exit my DSi game, boot up the camera app, and take the same picture.

Even though I’ve had a Nintendo DS Lite for some time now, one of my favorite games that I play on the system is still an old GBA title: Puzzle Fighter. While Nintendo doesn’t have nearly the same level of support for the Game Boy Advance platform as they once did, there are still plenty of classics on there that have not yet been ported to the DS.

The lack of a GBA slot isn’t a deal killer for me, per se, but it does take away one of the better features on the original DS and DS Lite.

3. No Need for MP3 Music Player

I’ve got an iPod and I’m perfectly happy with it. Whether I’m going for a stroll through the park or I’m waiting for my flight at the airport, the iPod serves me very well in providing some aural entertainment. I have an 8GB nano and that’s more than enough room for plenty of tunes.

The Nintendo DSi, by contrast, will largely rely on the SD card slot for storage and I don’t really see myself using the music player all that much. After all, I have a DS-Xtreme cartridge where I can run a homebrew MP3 player if I really wanted to do that. I’ve tried the app and I find that I never use it. The iPod is perfectly adequate.

4. Waiting for the Killer Game

I didn’t get the Nintendo DS Lite right away. I was reasonably happy with my GBA-SP and I thought that I’d be able to put it off. And then I saw my friend playing Mario Kart DS and Tetris DS, enjoying the Wi-Fi connection to play with other gamers around the world. That was the feature that turned the DS into a “must-buy” for me. I love Kart, I love Tetris, and I love the ability to play with others.

If you look at some of the early promotional material for the DSi, you’ll notice that the focus is very heavy on the hardware improvements and there is very little mention of any new games. The new features are alright, I suppose, but until there is a killer DSi title that I absolutely must play, I won’t be running to my local retailer just yet.

5. Already Own a DS Lite

I think that if I owned the original DS Phat, I probably wouldn’t have upgraded to the DS Lite. By the same accord, because I have the DS Lite, I am much less likely to invest in a DSi just yet. I still play some of the older games in my library and haven’t purchased a new DS game in quite some time.

The DS Lite satisfies my portable gaming needs for now (the PSP collects dust), but Nintendo may be able to sway me toward the DSi in the very near future. Just release that killer “must-have” title, Ninty!