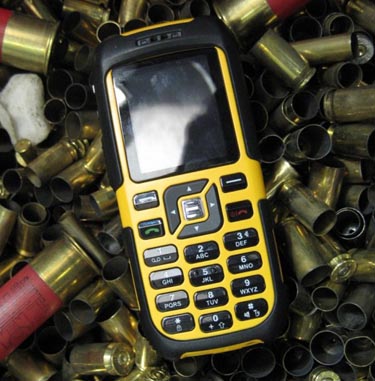 It’s an age-old question that has been burning in the back of our minds for quite some time, so Christen da Costa decided to finally lay the matter to rest. The Sonim XP1 is marketed as an indestructible cell phone, but can it withstand a shot from a 9mm gun? Will it survive the bullet?

Heading out to the LAX shooting range in Inglewood, Christen decided to find out. He got the shooting range people to dangle the Sonim XP1 off in the range, he picked up his trusty 9mm pistol, took aim, and fired. Boom.

The super rugged phone has gone through its fair share of torture tests in the past and, as far as the company is concerned, the Sonim XP1 has been able to tackle all comers. They’ve tossed it, abused it, and dunked it just about everywhere, but it has never been shot at with a gun.

Well, here is the video produced by GadgetReview. As a benchmark, they first took aim at a Sony Ericsson S710 to see how a regular phone would hold up against a gun shot. The rest, as they say, is history.