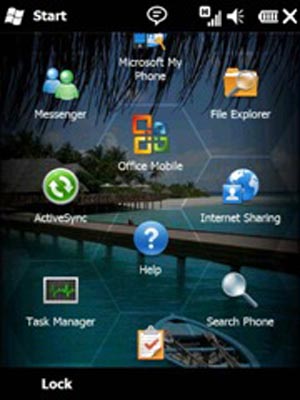 Aside from the introduction of that honeycomb interface, Windows Mobile 6.5 really isn’t that different from the current phones running on Windows Mobile 6.1. There are some minor tweaks, to be sure, but it’s not quite the massive overhaul that we’ve been wanting for some time now.

When I spoke with Microsoft at CES in January, they said they were still working on Windows Mobile 7 but they couldn’t give me a date. Well, Ballmer has now given us a date. Well, more like a date range, but at least we’re getting closer to what we want.

According to Microsoft CEO Steve Ballmer, Windows Mobile 7 will not be hitting the primetime stage until some time next year. The unconfirmed word is that an official build of the smartphone OS will be sent to handset manufacturers in November and then consumer devices with WM7 will hit the pavement around April 2010.

In the meantime, Windows Mobile 6.5 (shown here) goes live in the second half of this year, Microsoft will not be making a phone of its own, and a “skinny” version of Windows 7 is being developed for netbooks.