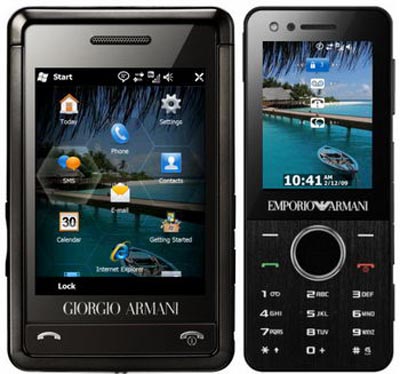 Although the results of their collaboration haven’t really panned out in major profits just yet, Samsung and Armani are teaming up once again to create yet another mobile phone. The first two phones were rather conventional in their approach, but this time around, Armani and Samsung are capitalizing on our interest in smartphones.

Unfortunately, the next Armani phone will not be the hotly anticipated Android phone from Samsung. It’s not doing Linux, Symbian, or webOS either. Instead, the Korean electronics giant and the haute couture fashion house are going to produce a Windows Mobile handset.

The next phone, yet unnamed, will get powered by Windows Mobile 6.5, but we’re not sure if it’s going to have a touchscreen, a keyboard, or both. Given the popularity of touchscreens, we’re pretty sure that will be involved in some way.

Ryu Jae-hyun, Samsung Taiwan’s mobile marketing department director, told the Taipei Times that this phone should be launching some time this fall, but no other details were provided.