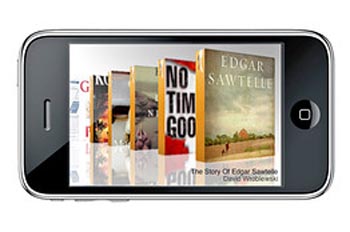 The new Amazon Kindle 2 was proudly unveiled to the world earlier this month, improving on the original Kindle e-book reader in just about every way. The design was simplified, the keyboard was made easier to use, and it was skinnier than ever before. You still get the same Amazon store integration with the ability to download new content over a wireless 3G connection. Many people are saying that the Kindle is to e-books as the iPod is music. That’s a pretty bold comparison.

For us poor Canadians, however, we left out in the cold when it comes to wireless e-book enjoyment. It is possible to purchase e-books through a laptop when you’re in the presence of a Wi-Fi hotspot, but you don’t get the same kind of ubiquitous access as you would with a Kindle. Even if you were to invest in something like the Sony Reader, you’d have to go through the process of loading e-books on there before you could get down to any reading.

In tackling this little conundrum, Indigo Books & Music is releasing its own version of the Kindle for Canadians… sort of. Indigo, which also runs all the Chapters bookstores across the country, wants Canadians to enjoy e-books too and they’re doing it with what they call Shortcovers.

What is Indigo Shortcovers?

Instead of offering a dedicated device like the Amazon Kindle, Indigo is taking a wholly different approach. Shortcovers is a mobile book store that can be accessed from a number of different wireless devices include the popular Apple iPhone and a range of BlackBerry smartphones. There’s mention of upcoming Android support, but since there is no Canadian carrier with Android yet, this is kind of a moot point.

Since you will be using your chosen smartphone (Shortcovers should also work on a regular laptop as well), you still have the same kind of ubiquitous wireless data access as the Kindle, only in Canada and not on a dedicated device. From the online store, you can directly purchase and access a range of material, including books, news stories, and serialized content.

To give a sense of what Shortcovers is all about, here is a brief promo video that the Indigo people put together.

Why Shortcovers Is the Amazon Kindle Killer

Unofficially, people are saying that Indigo’s Shortcovers can be a real Amazon Kindle killer. Why? Let me count the ways.

Why Shortcovers Will Never Kill Kindle

Shortcovers, which launches February 26th, certainly has a few nice things going for it, but it’s not without its shortcomings. In the end, it probably won’t kill the Kindle and here’s why.

It’ll be interesting to see what happens with Shortcovers in the coming months. Will it have the same impact in Canada as the Kindle had in the United States? Time will tell.