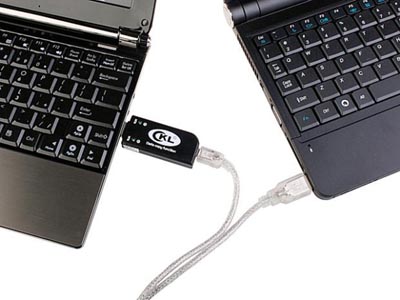 If you happen to live downtown in a major metropolitan area, you probably don’t have too much trouble finding an available Wi-Fi hotspot. This isn’t the case with a lot of other places and, well, not all of us want to fork over the big bucks for mobile broadband. Wouldn’t it be nice if you could just share some webby goodness?

Brando feels your pain. If you happen to have a buddy with a 3G connection, the two of you can effectively share that Internet connection using this handy USB dongle. The dongle plugs into the computer (presumably a laptop) that has an Internet connection of some kind. A cable is then used to connect it to the net-less companion, providing the latter with access to the web.

You would assume that such a connection would require the installation of software and drivers, but Brando assures us that this solution is completely plug-and-play. In addition to sharing some EVDO or HSPA action, you could presumably share some Wi-Fi too if you don’t want to be sharing passwords and such. The host computer is probably slowed down by sharing though, as the data still has to pass through its processor.

The $29 Brando Internet Connection Sharing Dongle can also be used as a crossover cable, allowing you to send files back and forth between the two machines through an FTP-style drag-and-drop interface. The dongle works with XP and Vista, so no Mac love just yet.