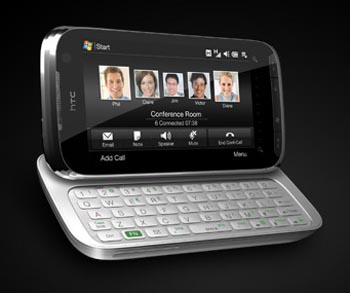 This just goes to show you that Twitter has become an incredibly powerful communications tool (don’t forget to follow me too). Instead of issuing a standard press release, HTC announced the pending North American availability of the HTC Touch Pro2 via its Twitter account.

As you may recall, last week HTC revealed the Touch Diamond2 and Touch Pro2 to the world, giving us a glimpse into the next generation of Touch-series smartphones from the popular Taiwanese company. At the time, we heard that select Europe and Asia markets would be getting these handsets early in the second quarter of this year.

Also at that time, they said that most of the rest of the world would get the Touch Diamond2 and Touch Pro2 some time in the second half of the year, but there was no official confirmation as to exactly which markets would get the phones too. Australia? India? America? We had no idea.

Well, HTC and Twitter let us know that the HTC Touch Pro2 will indeed be hitting the North American market in late Q2. Expect to pay a pretty penny for an unlocked version, though HTC may set up some deals with providers among our fold.

As a quick reminder, some of the more notable features on Touch Pro2 include a 3.6-inch WVGA touchscreen, TouchFLO 3D, Windows Mobile 6.1 Professional, QWERTY keyboard, and 3.2 megapixel camera.