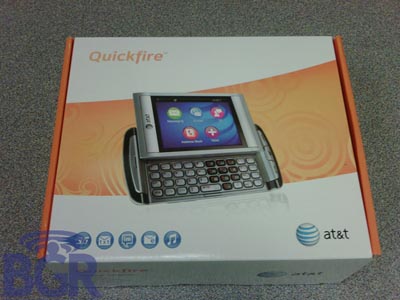 Late last year, we were formally introduced to the AT&T Quickfire, a messaging-centric handset that you may otherwise know as the UTStarcom GTX75. Well, you might not know it by that name, but that’s really what it is. Not that it matters anymore, though, because AT&T has yanked the QWERTY phone from its shelves.

In fact, AT&T has issued a notice to all store managers across the country, telling them to take the AT&T Quickfire out of their retail locations altogether. This not only involves the cessation of sales of the QWERTY-packed device, but also to remove any demo models from the stores’ floors.

Why would AT&T yank the Sidekick-fighting communicator from its lineup so soon after its launch? Short on stock? They all need firmware updates? As it turns out, they’re saying that the reason behind the pull is “quality issues,” though they don’t get any more specific than that. The exact “quality issue” was not exactly spelled out.

For anyone with an AT&T Quickfire (they apparently sold reasonably well during the holiday shopping season), have you found any major issues arise with your phone? Does the slider mechanism break down? Does the phone inexplicably freeze, prompting you to run to AT&T to swap for an iPhone instead?