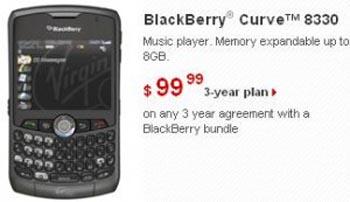 While neither has the BlackBerry Curve 8900 just yet, the adjustments in pricing could be reflecting some changes in priorities for a couple of Canadian cellular providers. It seems that if you are Canadian and interested in a BlackBerry Curve that you can find two very different prices on the exact same phone.

Starting at Telus, it is possible to get the BlackBerry Curve 8330 for just $19.99. There are a couple of caveats in place, of course. First, the deal is being offered through Future Shop, so you won’t be able to get it a Telus corporate store. Second, you’ll need to sign a three-year contract that involves a voice and data plan of at least $45 a month.

On the flip side, we find Virgin raising its price on the BlackBerry Curve 8330. It’s the exact same phone, but if you choose to go with the MVNO for all your email and messaging needs, you’ll need to fork over $99.99 on a three-year contract. If you nabbed this handset around Valentine’s Day, you could have had it with Virgin for $39.99.

Talk about some crazy see-saw action! In any case, the Curve 8330 is getting a little dated, so it’ll be good to see some new QWERTY RIM action with the Canadian CDMA crew soon.