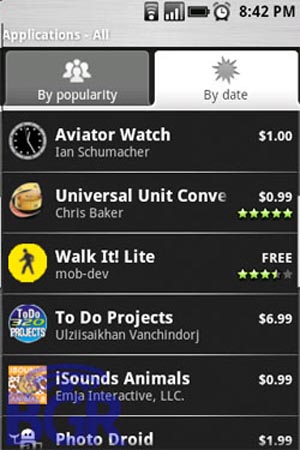 The floodgates have been opened and we are already starting to see some of the fun things that paid applications will be bringing to the Android Market.

As you recall, Google and the rest of the Android crew started to allow paid applications into the Android Market last week and the first few apps are starting to find their way onto people’s handhelds. Prices range considerably, of course, but there are quite a few available for under two bucks.

That’s the good news. The bad news is that not everyone with a T-Mobile G1 is able to buy these functional applications just yet, because they’re still waiting on those OTA updates. Some people have the update and are thus able to buy casual games and currency converters, whereas others still have to wait.

Of course, it’s far too early to tell how well Android Market is going to be with the distribution of fun paid apps, but based on how the App Store is doing for Apple and the iPhone, I think the Google bot will be just fine.