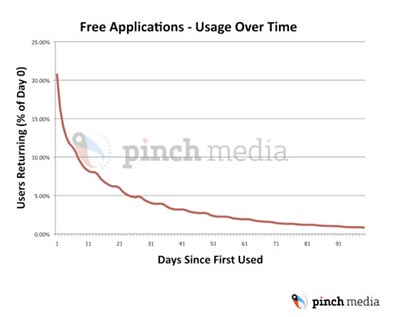 The App Store for the iPhone is both a blessing and a curse, because while there are certainly some useful apps, there is also a lot of crap. Pinch Media collected some data on the matter and their findings are quite the eye-opener.

People who own an iPhone tend to download a lot of applications, particularly free ones, but how much use do these apps get? The iPhone people obviously fiddle with their downloads on the day that they get them, but what kind of lasting value does something like the iFart provide?

It turns out that just 20% of users return to an application the day after it is downloaded. This figure drops to just five percent after one month. This essentially means that for every twenty apps that you download from the App Store, you’ll probably only still be using one of those 30 days later.