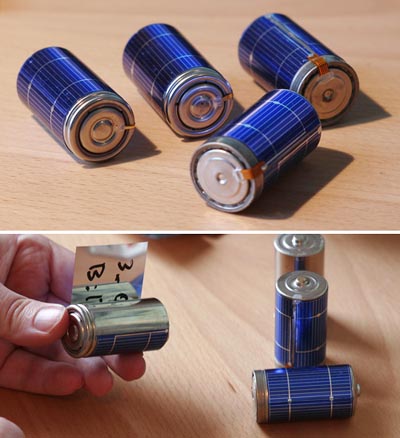 We could all be a little nicer to Mother Nature. The next time you head out for a coffee, for example, you could bring your own mug instead of getting the disposable paper cup that the barista uses. A similar philosophy can be taken to our use of electricity as well.

We use batteries in all sorts of things, from cameras to video game controllers, so wouldn’t it be nice if they could recharge on their own? That seems to be the idea between the SunCats rechargeable batteries by designer Knut Karlsen. The otherwise conventional NiMH batteries are wrapped in a flexible Photo Voltaic cell.

This solar panel, in essence, is able to act as a trickle charger for the batteries. When they are spent, you can remove them from your chosen device and place them on a windowsill somewhere. After they’re done charging, you can use them again. I’m thinking that the charging process won’t be quite as fast as those in-wall quick chargers, but you’re doing your part for the environment right?

The current version, as mentioned, is just a trickle charger, but Knut Karlsen plans on expanding on this idea in the future by implementing built-in capacitors and electronics so the process can be more efficient.

The other potential hiccup? Your solar batteries are hidden away from the world when they are being used, but creating all sorts of adapters for all sorts of devices could prove to be an exercise in futility (and frustration).