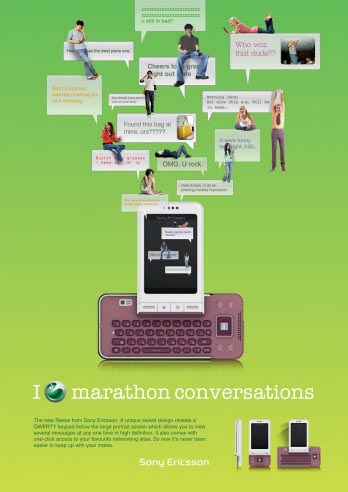 We spotted a teaser picture of this supposed phone a short while ago, but this looks like official promotional material for the new Sony Ericsson “Reese” social networking phone.

It’s possible that Sony Ericsson will have more news at the Mobile World Congress this week in Barcelona, but we’re still not entirely sure whether that will happen or not. If this phone is indeed legitimate, it has one of the most interesting form factors I’ve seen in a while.

In its closed position, the Sony Ericsson Reese looks a little like the T-Mobile G1. It’s got that portrait-oriented display and then a section underneath with some controls. However, you can swivel that display 90-degrees to reveal a full QWERTY keyboard.

Unlike other phones with slide-out keyboards, your display is not landscape-oriented with the keys. Instead, it stays with a portrait-orientation as depicted here. Very strange. The idea is that this allows you to “view several messages of any one kind in high definition.”

That’s because the Reese is designed largely with social networking in mind, including one-click access to several of your favorite online networks. “It’s never been easier to keep up with your mates.”