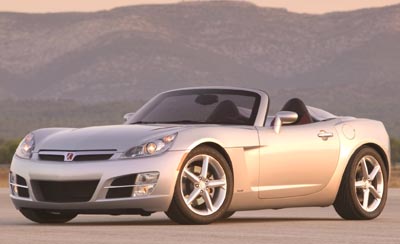 Some may call it a restructuring plan. Others may call it the end of an era. Whatever you want it to call it, General Motors has announced that it will axe two of its major brands. GM already has far too many brands for its own good, so this shifting of resources has been a very long time coming.

The Saturn brand, which pushes out the totally awesome Saturn Sky roadster depicted here, will be completely shut down for good. Dealerships will close their doors by 2011 and no new models will be introduced under that banner between now and then.

The Pontiac brand won’t be completely sent to the glue factory, but General Motors did say that they will be significantly “de-emphasizing” the brand. As you know, many Pontiac and Chevy vehicles share the same platform and architecture, so there isn’t much of a sense of having one car with two names. Pontiac will still have some “niche” models, but they will be sold at Chevrolet dealerships.

Realistically, this is for the best and the plan is a part of GM’s viability plan for the future. Further to this plan is the proposed sale of Hummer and the spin-off of Saab. Saturn has never been profitable to GM, so while there are some nice Opels in there, it’s time to bid the planet adieu.

Pontiac G8 to be Unveiled in Chicago