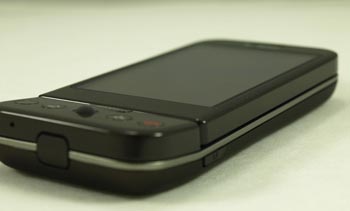 When the T-Mobile G1 was officially unveiled to the world last year, one of its most prominent features was the protruding “chin” that housed the trackball. HTC never did explain why the handset took on such a design cue, so we were left scratching our heads.

Yesterday, we caught glimpse of the HTC Magic, an Android-powered phone that we had otherwise known as the G2. Again, this new Android phone also featured the “chin” on its lower section? What’s up with the Leno-inspired design?

Well, Jesus Diaz of Gizmodo did a little poking around, finally asking the developers at HTC why they decided to give both of their Android phones the Leno effect. The answer? Personality. According to HTC, the Android phones are like people, so they have chins and personality. Riiiight….

HTC also noted that the “chin” allowed the phone to have the trackball stick out a bit more than competing devices, because the chin protects it. This is supposed to make the trackball easier to use compared to other trackball-based devices.

Androids are like people, eh? As long as my Android phone suddenly doesn’t ask me to come with him if I want to live, I think I can tolerate the Leno effect.