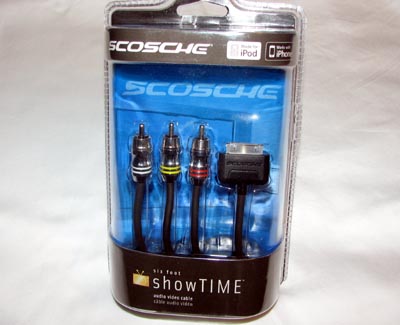 A couple of months ago, I had the opportunity to review the Griffin Component A/V Cables for iPod. In effect, you are able to connect your iPod (or iPhone) to your television through a standard component cable connection, sharing all of those video podcasts and other video content through a much larger display than your squint-worthy iPod.

Today, I’m taking a look at the Scosche showTIME AV Cables which effectively do the same thing. The version that I have here makes use of a composite video connection (one yellow for video, red and white for audio), so I expected the video quality to not be quite as good as the component (RGB) connection that the Griffin cables had. I should note, though, that Griffin also has a composite version of the cables as well.

In terms of first impressions, the Scosche showTIME cables appear to be somewhat better quality than the ones from Griffin. The cables themselves are a little thicker, presumably to help with signal interference. With cheaper cables that are thinner, you may experience electrical interference from your television and your other home theatre equipment. In using the Scosche showTIME cables, I did not experience any interference. That said, I didn’t have any trouble with the Griffin version either.

Because of the thicker cables, I am given the impression that the Scosche cables are possibly higher quality. You do have to realize, though, that you are pumping video content from an iPod through a composite connection, so I wouldn’t expect too much in terms of video quality.

Indeed, when I tried watching one of my favorite video podcasts (The Dog Whisperer), the quality was far from exhilarating on my 32-inch Samsung LCD. It was watchable, I suppose, but it was nowhere near the quality of digital cable TV. This is not the fault of the cables, I’m sure, as much as it’s the fault of the iPod itself. Nature of the beast, I suppose.

The quality of the connectors on the showTIME, much like the cables, appeared to be quite high quality as well. They’re metal and not plastic, but there is no gold-coating like how you find on some other home theatre equipment. Scosche spared this expense, but it’s understandable when such an expense isn’t all that necessary. 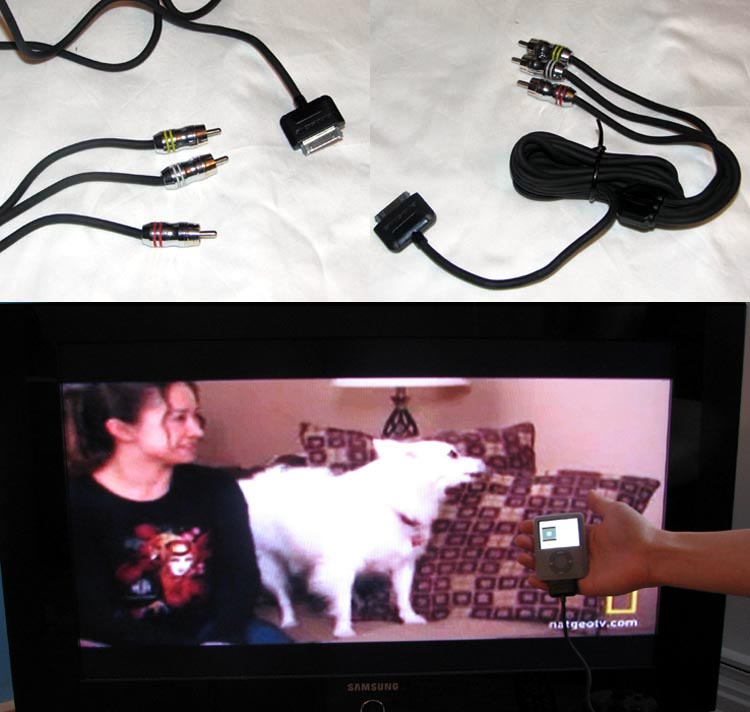 Naturally, setup and configuration is a breeze. On the one end, you have the iPod connector that will work with any video-capable iPod. This includes my third-gen iPod nano, as well as the iPod touch (both gens), iPhone (both gens), iPod Classic, iPod Video (5G), and the newer 4G nano. The other end are the three standard composite connectors (yellow, red, and white) for connecting to your TV.

This connection scheme is fine for watching video content, but it is unfortunate that you can’t use this same connection for pure audio. This is a shame, really, because it would be quite convenient to use your television as an iPod speaker dock. The Griffin cables were much the same, but I wonder if another manufacturer was able to overcome this without having to bring in another piece of hardware.

One advantage that the Griffin iPod A/V cables had is that the package included a PowerBlock USB-to-AC wall charger. The Scosche variant comes with just the set of A/V cables, but it does run at $10 cheaper. The MSRP is $39.99.

Forty bucks isn’t terribly expensive for a set of cables, especially ones that connect your iPod to your TV, but you have to consider how often you’d use something like this. That said, if you have a multimedia system in your car, this could be an inexpensive way to pump video content onto your in-dash (or behind-headrest) display.